passover. i don't know where to begin. for many years, while my great-grandmother, a fantastic woman we all called mame, was still alive, my family frequently gathered for seders in my grandparents' dining room. it's a terrifically large room by NY standards, right off the most poorly designed kitchen of all time. my first holiday memories live in that room. i so fondly recall my grandfather's masterful presence as he led the seder. i smile at my childhood impatience waiting for what no doubt felt like hours until we could take our first bites of food. i remember the excitement of being excused from the table before the seder's end with my brothers and cousins, tearing off my frilly socks and shiny mary jane's and forcing myself to keep up with whatever (likely violent) games they were playing in the room we proclaimed our territory. my favorite game, utterly thrilling to children who grow up in houses and not apartment buildings, involved the elevator bank and hallways on entirely foreign floors. i loved passover in NY. but at some point my memories of new york seders fade and the ones led by my father at home come to life. and these memories are equally sweet. these memories begin in the kitchen, of course, where my responsibilities ranged from skinning apples for haroset, a job i loved, to peeling the shells off hard boiled eggs, a job i was terrible at and one which left me with tiny cuts all over my fingertips, to creating pretty little place cards for the 20-30 guests joining us for seder, a job i took very seriously and one that also took place in the kitchen, of course. as i got older my responsibilities grew and eventually included cooking and baking. i have loved all these seders, and still do. our house bursting with the happy noise of family and friends, my father at the helm as we all engage and argue with the text in front of us, stained with wine and smudged with salt water from years of use. 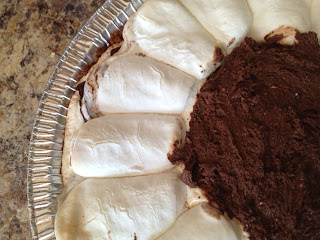 so i love passover and always have. but it is not, by any stretch of the imagination, an easy holiday. to begin with, each year we are challenged to see ourselves as if we had been the israelites to come out of egypt, freed from bondage by god's mighty hand and outstretched arm. this is a difficult charge, and one that, though often minimized, is at the very core of the holiday celebration. and then there's the preparation for the holiday. everyone has a different standard for this, though most involve cleaning of some kind. i hate cleaning. and my memories involve not just cleaning, but schlepping, too. first we had to box up i don't know how many cabinets full of pots and pans and dishes and platters. then we had to bring all the boxes to the basement. from the basement we had to bring up the boxes of kosher for passover pots and pans and dishes and platters and unload them. add to this the constant sound of the vacuum cleaner and jake and joey and me bickering over who was helping the most/least. it was miserable. some people don't go this far for passover. they simply stop eating products made from hametz, which are forbidden during the holiday. these happy people eat their matzah on their regular dishes. (what qualifies as hametz is, of course, subject to interpretation and argument.) other people go as far as possible. i've even heard of a homes with a separate kosher for passover kitchens! there's also the question of the hechsher. some people believe that in order to be totally and completely kosher for passover, you have to be entirely certain your food has never touched anything made from hametz, and it therefore must be approved by a certain rabbi and get a special seal deeming it kosher. so a can of tuna isn't kosher for passover unless a certain rabbi said so. and neither are hearts of palm. the struggle continues even after the seders, for you can only eat leftovers for so long before the very sight of them makes you sick (there are always so many leftovers) and you're forced to find creative ways to eat for an entire week. pizza never tastes as good as it does at the end of passover! 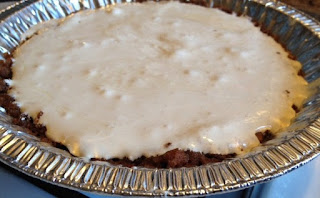 this year josh and i are home for all of passover. according to our own, still-being-developed custom, we don't use any of our wonderful and useful pots, pans, dishes, or platters. like both sets of our parents, we do a passover switch. but here's the thing. we don't have a basement. we barely have a closet. every inch of our storage space is being used--josh built shelves on top of shelves on top of shelves wherever he could. our passover kitchen equipment consists of a pot, a pan, one okay knife and 4 terrible ones, some tupperware, some disposable tin baking trays, a cutting board, a serving spoon, a spatula, and some plastic cutlery and paper plates. this makes cooking and baking... challenging, to say the least. but i like a challenge, so this year when i was told that as of april 1st i'd no longer be allowed to travel more than an hour from the hospital where i'll be delivering and we made plans to have seders in NY with family, i volunteered to bring a few dishes to the second night seder at my grandparents' apartment. dessert would be the hardest, because not only would it have to be made from hechshered ingredients, it would also have to be... pareve! gasp! it's actually possible to make decent tasting passover desserts, but most of them involve butter. i didn't have that luxury. 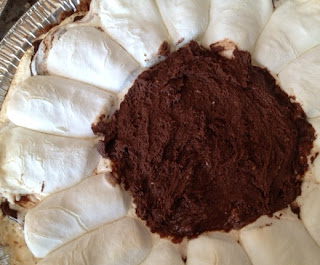 josh and i went on our first passover shopping expedition with our friend jodie (i swear, there are just that many j's in my life) to a kosher discount grocery store in a little section of brooklyn known as borough park where pretty much all the store fronts are either kosher groceries or wig shops. wandering up and down the sizable kosher for passover aisle, i was inspired by marshmallow fluff. i don't know why. i've only used it once before in my life and i don't recall being particularly fond of it. but there it was on the shelf with the proper seal of approval. just down the aisle i came upon dark chocolate bars. my mind was made up. somehow, i was going to create kosher for passover, pareve smores. somehow. 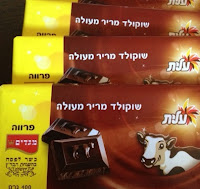 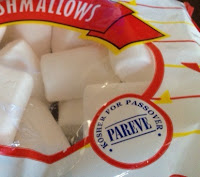 the rest of the ingredients i managed to find at the food emporium near my dr.'s office, which actually had an impressive passover section, and at the holy land market, a wonderful little israeli grocery store in the east village. my local grocery stores seem to think that jews subsist entirely on gefilte fish throughout the holiday. gefilte fish and these horrific little multicolored gelatinous rings covered in chocolate. it's hard to say which is more disgusting. 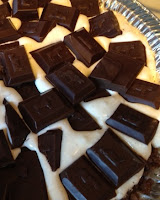 i had all the ingredients. all i needed was a little... luck. 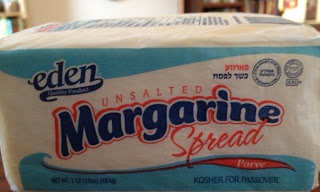 to make two pareve, kosher for passover smores pies:
1. i preheated the oven to 350 degrees F, then started by bashing up vanilla and chocolate chip passover cookies, which smelled exactly like matzah. this process took a while because i bashed them up in a tupperware using a spatula. (this was actually nothing compared to what it took to make the sephardic haroset with a sad knife and small cutting board.) 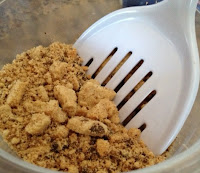 2. next, i added the brown sugar, melted the margarine, and pressed the cookie crumble into the bottom of tin pie pans. it actually resembled a cookie crust. then i baked them for about 10 minutes.
3. when the pie crusts cake out of the oven, i poured the marshmallow fluff all over them. one can per pie. turns out i maybe should have tasted the fluff before i did this, because pareve, kosher for passover fluff is almost unbelievably sweet. next i broke the chocolate bars into small pieces and placed them in a layer on top of the marshmallow fluff, then put the pies back in the oven for about 10 minutes, or until the chocolate was melted. when i took them out, i sort of swirled the chocolate in with the fluff, already regretting not having bought more chocolate and using so much fluff.
4. after that i cut the marshmallows in half and placed them around the edges of the pie in a nice little pattern. who says a pareve, kosher for passover dessert shouldn't be pretty. i popped the pies back in

the oven for a few minutes until the marshmallows browned ever so slightly.
5. then i pouted because i knew i needed more chocolate, and the likelihood of finding it in my neighborhood was not very good. i went in search of it anyway and was amazed to find a container of spreadable, pareve, kosher for passover chocolate at our local, overpriced, fancy market. i also used this before i tasted it, which may also have been a mistake. the taste actually changes while it's in your mouth. surprisingly, it begins with a kind of weird, overly sweet taste, somewhat reminiscent of plastic, but the aftertaste makes you believe you've actually just consumed regular chocolate. very tricky. i put a couple tablespoons of this in the center of each pie and spread it out to reach the marshmallows. and then i was done! 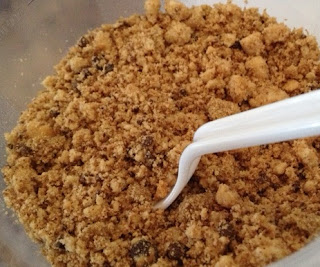 the seders we attended were wonderful and i was extremely happy to celebrate passover with my grandparents, which i haven't in many years. my family members actually managed to eat the pies, and some of them even made encouraging remarks. my grandfather, the great pie lover, enjoyed his piece (and the piece he snuck later on) immensely, which was all the praise i needed. next year i think i'll forgo the fluff and stick to the boxed cakes. 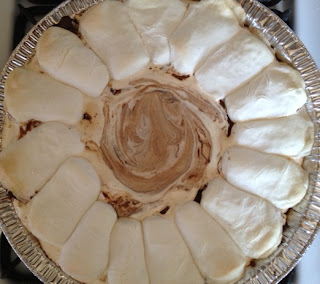 now it's time for me to eat the same lunch for the fourth day in a row. leftover haroset on matzah. saturday night can't come soon enough.
Labels: dessert holiday passover