donuts. in cakes. on the cape.

when you marry someone, their family is not yet your own, and you have to learn to navigate an entirely foreign dynamic, which, needless to say, can be difficult. you're thrown into another entity--a group that existed as a unit before any of them ever knew you existed--and with your spouse comes a family history, quirks, ways of understanding the world, and traditions. 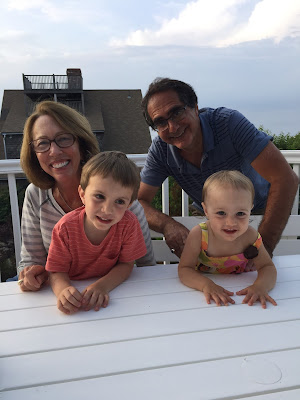 if you're lucky, like me, you marry someone whose family comes from providence and has a summer tradition of renting a house in cape cod for two weeks every summer.

you see, before i met josh, The Cape was a mysterious far off land, somewhere up there on the map, part of a state i knew only for boston and cambridge. people always flexed their arm muscle as they explained the geography of this place with an abundance of hydrangeas and i smiled politely and pictured people with blonde hair wearing pastel shirts tucked into shorts with small marine animals decorating them.

but, oh, oh, oh, cape cod. how i've fallen for this place with its quaint-but-not-too-quaint towns. its ancient trees. its ever-shifting bay, high tide so high the rocks upon which we collected hermit crabs and went splashing in the tide pools mere hours before are nowhere to be seen, low tides so low the beach is an endless expanse into the calm, blue waters. the gardens here are well tended, full of color, a source of pride. there are ice creameries on what seems like every corner. cranberries actually grow around the corner from the house my in-laws rent. you get the idea. and when we're here, we're on vacation. and i don't mean we don't have to work (i've actually been working a good deal while i've been here), i mean when we arrived a few days ago my mother-in-law said "you're off duty." magical words to the ears of the mother of two toddlers. a vacation, indeed.

with time to bake. 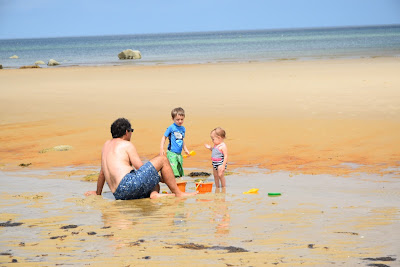 one of the traditions that has become essential to these visits, whether they last two days or five, is a baking experiment. you see, we stay just down the road from dear friends of my in-laws, who have children who have become dear friends of ours, who now have children of their own we hope will become dear friends of our children. and so on. and every year rebecca and hannah, wonderful, clever sisters, come up with a baking experiment for us to complete. an example: gluten free cronuts, which were successful probably only because we deep fried them and coated them in powdered sugar, and deep frying anything and covering it in powdered sugar can redeem it from a sad, dry, flourless fate. this year it was donut cake. and i don't mean a stack of donuts assembled in the shape of a cake. i mean donuts in a cake. my extraordinarily brilliant grandfather once remarked, "i love all donuts and anyone who doesn't is a pervert." i couldn't agree with him more. and, well, by now it should be quite clear how i feel about cake. besides which, i've long been a fan of this kind of baking. my hamantashen (sadly, not blogged) this year were peanut butter cups inside chocolate chip cookies inside chocolate sugar cookies with crushed pretzels on top. i believe that putting delicious things inside of other delicious things is almost always a good idea.

rebecca was inspired by a helpful recipe she found in people magazine. the difference between the way rebecca operates in the kitchen and the way i do is drastic. she is a recipe follower, uncomfortable with veering from the set idea and steps laid out before her. i, on the other hand, find it nearly impossible to follow recipes exactly. i'm a rule follower in life, but not in the kitchen. hannah helped us reach a very respectable agreement: we'd just have to make two cakes. 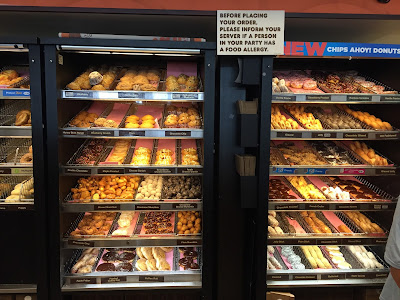 yesterday morning the three of us set out for dunkin' donuts bright and early. we stood in line once and ordered donut holes to taste test as rebecca's recipe called for donut holes. we tried four kinds and had a very serious discussion about the merits of each and their suitable cake pairings. (cinnamon donut hole-->coffee cake. glazed donut hole-->any kind of cake. chocolate donut hole-->highly underwhelming. boston kreme donut hole-->not as good as a full size boston kreme donut.) after much discussion we thought we'd made up our minds and marched back to the counter. when we got there we spotted something we'd missed during our first order--a chips ahoy cream filled donut--and, as you can imagine, in a moment everything changed. we ordered one and brought it back to the table, full of hope. it was one of the most disappointing donuts i've ever eaten. the chocolate glaze on top wasn't the issue, nor was the cookie crumble, which neither added, nor detracted from the overall taste of the donut, but the cream was an inexplicable color and taste. a disaster, really. so then, for the third time, we went to the counter and placed our order. two dozen glazed donut holes and four boston kreme donuts. the big ones. 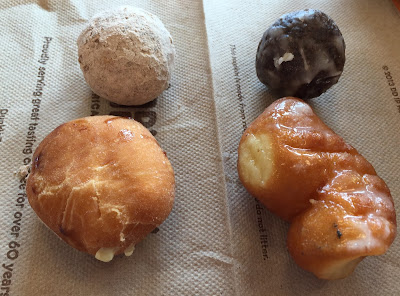 then we went to stop and shop and had to make more hard decisions. there are just so many cake mixes and frostings. it's even possible to buy a pink and white zebra striped boxed cake mix. what is this, the future? anyway rebecca and hannah settled on a white cake funfetti mix for their glazed donut holes with a blue vanilla frosting with sprinkles. i grabbed the chocolatiest thing i could find--triple chocolate fudge cake, which was a pretty clear choice because three times the chocolate is three times better than regular chocolate cake, and besides, it had the word fudge in it. the frosting gave me pause because i didn't want to go straight up vanilla. i wanted something to match the cream in the boston kreme. and then i saw it. buttercream, of course.

we went home.
we went to the beach.
we bathed our sandy children and took naps.
and then we baked. 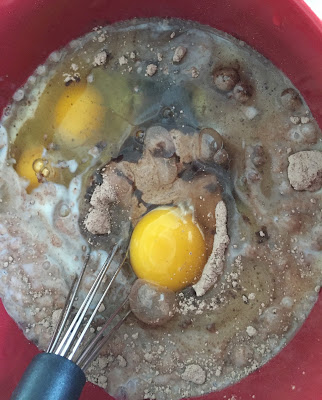 we followed the recipes on the back of our boxes. (i wish i could meet the helpful person who created the just add water, oil, and eggs box cake mix and shake his hand.) but here is the most ingenious thing the recipe from people magazine suggested. REPLACE THE WATER IN THE CAKE WITH BUTTERMILK. buttermilk! so that's what we did. and then we poured some of that batter into a greased pans and layered our donuts and poured some more batter on top of them and baked them for longer than the box said to bake them because they were full of donuts. my cake was a little underbaked in the center, and the donuts felt a little hard on top, and i was worried about the cream leaking out and the cake being a total disaster, but there was nothing i could do but frost it and cross my fingers. 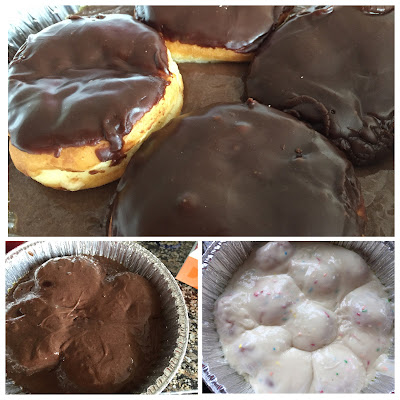 yesterday evening, out on the deck of the single most beautiful beach house i've ever had the great fortune to set foot in, overlooking the high tide with the sun setting over it, we dined. 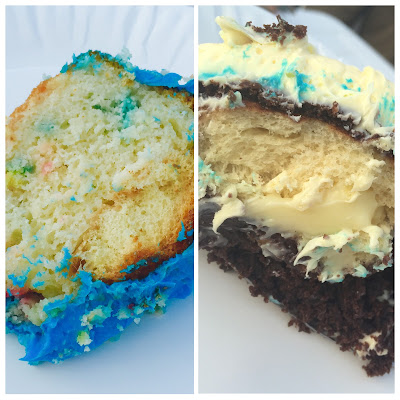 the confetti cake was fine. the donuts were a little dry and a little lost in the cake. the icing, however, was very popular with my children. and don't worry, i do feed them food other than cake. (sometimes they eat cookies, too.) 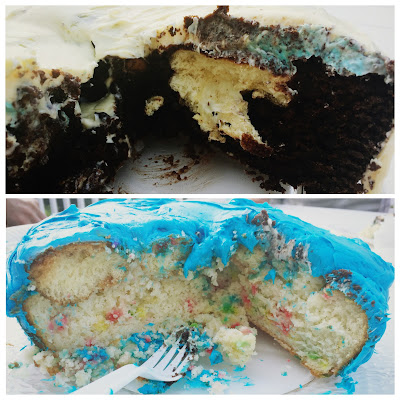 but, as it turns out, putting boston creme donuts inside of a triple chocolate cake baked with buttermilk and covering it with buttercream frosting is a Very Good Idea. maybe even one of my very best.

we're already talking 2016 baking challenge. maybe hannah, rebecca, and i will begin this discussion today, our toes in the sand, boats on the horizon, and happy children at our feet. 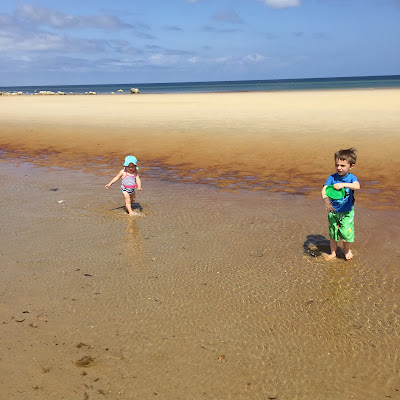