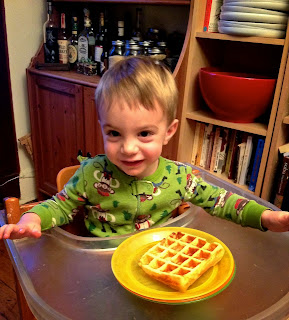 i must have heard somewhere that frozen waffles are good for teething. so he started on them young. i created a waffle addict. he's not even particular. he'll eat any kind of frozen waffle you can find in the grocery store. square waffles and round waffles and organic waffles and waffles with flax seed and generic store brand waffles and waffles with blueberries in them and whole grain waffles. he really, really, really likes to be in charge of putting the waffles in the toaster. it's not a good idea to do it without him. he also really, really, really likes to take the maple syrup out of the refrigerator by himself. he laughs maniacally when the toaster beeps (or pops, depending on where we are and what toaster we're using) and he is very particular about how much or how little maple syrup he wants. sometimes he wants none, sometimes the waffle is a conduit to the syrup. sometimes he still eats them frozen. he's 18 months old and not always sensible. 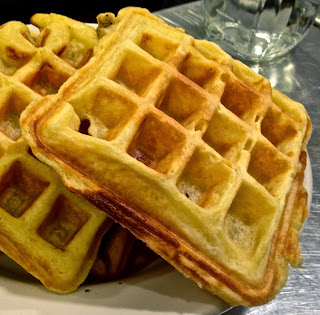 i actually rarely eat waffles myself. i think they're utterly wonderful, but i'm never inspired to order them at restaurants when we go out for brunch (which is approximately twice a year, sadly) because i'm usually more tempted to get something savory involving eggs and hot sauce. but, if i may make a recommendation, consider ordering a plate of table waffles. table waffles are what you get when you've practiced excitedly proposing to the friends and family you're dining with that it would indeed be the most fantastic idea to order a giant plate of waffles (or pancakes, or french toast) for everyone to share because that way no one needs to decide between sweet and savory and everyone can follow their delicious egg dishes with the taste of something sweet and you propose it so stealthily that no one really knows whose idea it was but when the meal is over people will say "hey, whose idea was that?" and you will tell them and then they will thank you. 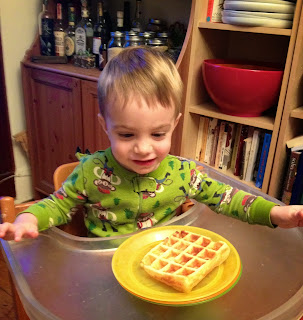 anyway, we don't have a waffle iron. i'd probably feel horribly guilty about buying frozen waffles if we did, but i have an easy excuse, which is that i do not have another single square inch in my kitchen to store any kind of equipment, let alone a large and heavy waffle iron. i don't even have have a half inch to spare. some day though. some day i'll get a waffle iron. (the same day i have a dishwasher and a washer and dryer and more than 1 foot of counter space.) cause really, as i learned at school during our breads unit, there's pretty much nothing as delicious as a homemade buttermilk waffle straight out of the waffle iron, onto the plate, topped with butter and maple syrup. and hey, they freeze pretty well, too.

so for all you lucky waffle iron owners out there, please try this. 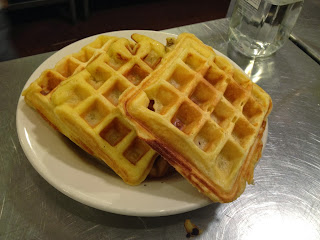 to make:
1. heat waffle iron.
2. mix together flour, baking powder, salt, and sugar in a big bowl.
3. whisk egg yolks, butter, and buttermilk in a smaller bowl.
4. mix the wet ingredients into the dry ingredients until the batter is smooth.
5. beat the egg whites until soft peaks form and then fold the egg whites into the mixed batter.
6. use a ladle to pour the batter, which will be thick, into the waffle
iron and cook for 5-6 minutes, or until they're perfectly done. serve with butter and syrup. and maybe some fruit. 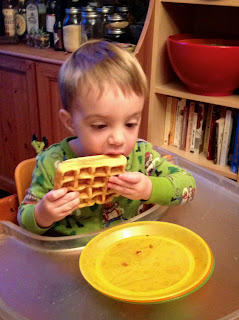 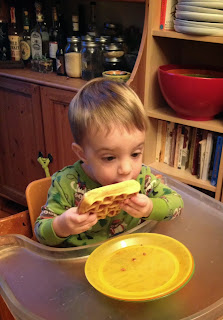