weeknight dinners. they're what happen before dessert.

below are a bunch of dishes i've made recently(ish).
i don't use recipes for these, so forgive the sloppy descriptions.
important note: everything tastes better with really good bread and cheese.

(i always thought it was silly for josh to take pictures of dinner. now i'm glad he did.) 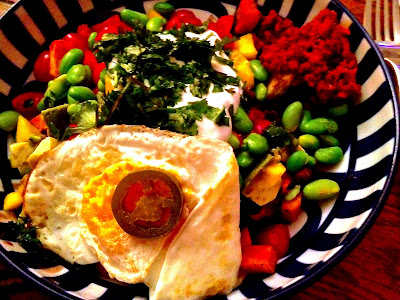 deconstructed huevos rancheros. sort of. but not really.
cut sweet potato into small pieces and roast with olive oil, lime juice, cumin, salt, and pepper. put the pieces in a bowl. open a can of black beans and put them in a pot on the stove. cook with cumin, curry powder, garlic salt, cayenne, salt, pepper, and any other spice you think would go well. put the beans on top of the sweet potato. chop up some avocado, tomato, and mango (i like tiny pieces of mango cause it's a nice bright little surprise) and squeeze some lime juice on top. add this, too. throw some roasted, salted edamame on top (i bought mine at the grocery store all ready to go in a little plastic container). combine greek yogurt with some lime juice. dollop this on top. if you have some kind of spicy sausage like thing--i used trader joe's soy chorizo--saute it for a minute and add it, too. fry an egg. put a piece of jalapeno on top of the fried egg. put the egg on the bowl. chop cilantro and sprinkle it on top. serve with plantain chips and hot sauce. call it a day. a very, very good day. 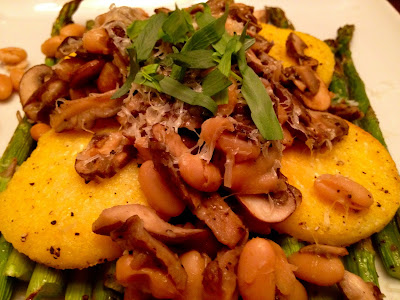 roasted asparagus with polenta, mushrooms, and white beans. layers are good.
roast some asparagus with olive oil, salt, and pepper. cut thin slices of pre-made polenta and fry them in a little olive oil until they're crisp on the outside and place them on top of the asparagus. saute mushrooms in a little butter (and maybe some white wine if you're feeling fancy) and add salt, pepper, and garlic salt and when they're almost done add some white beans to the pan. plop them on top of the polenta. shave some parmesan on top of the mushrooms and beans, then add some fresh herbs. tarragon gives it a surprising, interesting little licorice flavor. 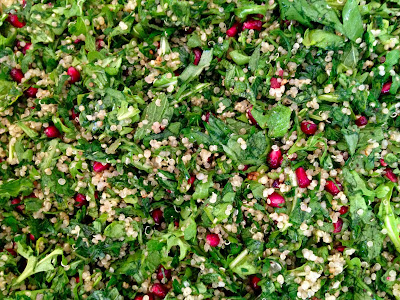 herb salad. that's right.
cook some kind of grain like cous cous or quinoa and when it's cool chop up arugula, parsley, mint, tarragon, cilantro, and any other herb you like and combine it all in a bowl. add pomegranate seeds and lots of lemon juice and salt and pepper and some olive oil and toss it all together. this will brighten any dinner. even on a tuesday. 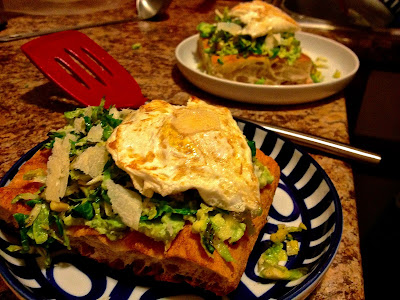 avocado and brussels sprout bruschetta. is that a stretch?
cut brussels sprouts into thin little ribbons and saute them in olive oil with a generous amount of salt, pepper, and garlic salt until they're nice and brown. mash an avocado with lemon juice, salt, and pepper and spread it on crusty bread, preferably one containing olives. put the brussels sprouts on top of the avocado followed by some shaved parmesan and a fried egg. let the yolk spill out over everything. let the mess happen. 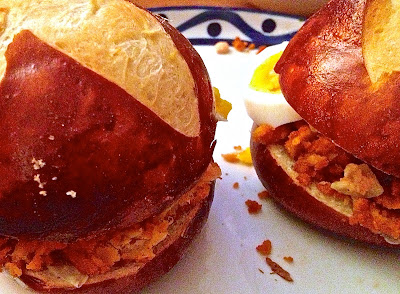 veggie buffalo chicken sandwich. in case you missed the superbowl.
buy a box of morningstar frozen buffalo wings. it's a good investment. microwave them and then cut them up into chunky strips and douse them in hot sauce like frank's and maybe a dash of bbq sauce. grate carrots, mash chickpeas, slice celery really really really thin and combine them in a bowl. add a bunch of red wine vinegar and some tahini and salt and pepper and stir it all together. melt some yummy cheese on a bun--i used pretzel buns because that seemed sensible--and soft boil an egg. put everything on the bun. sometimes superbowl food is just right. 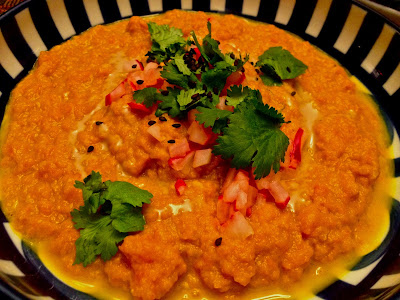 ginger miso carrot soup. cause becca told me to.
chop up some carrots and some ginger and some garlic and throw it all in a pot to saute in some sesame oil. add a little curry powder and lots of salt and pepper. pour veggie broth over everything and stir in some miso paste and cook until it's all tender. blend it all together and then add more ginger or miso if needed. chop up some radishes and pour rice wine vinegar over them if you have it or red or white wine vinegar if you don't. toss these on top of the soup for a nice little kick as well as some black sesame seeds you're not sure why you have. cilantro, too. if you're feeling feisty stir a little tahini with a little vinegar and drizzle this on top. who says you can't be feisty during the week, anyway? 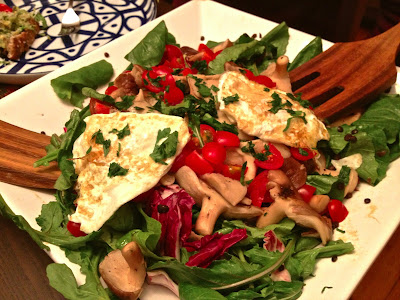 greens with beluga lentils, sauteed mushrooms. and a fried egg, of course.
first, you must discover beluga lentils, which will change everything. then you should cook them in some veggie broth and toss them over arugula or mustard greens or whatever delicious greens your husband brought home for you from the union square farmer's market on a wednesday. throw in some radicchio for an extra, bitter bite. saute some mushrooms in a bit of butter and marsala or sherry vinegar or red wine and throw them on there, too, along with some chopped tomatoes. toss it together in a nice, bright, lemony, mustardy vinaigrette then top it off with a fried egg. or two. maybe wednesdays aren't all that bad. 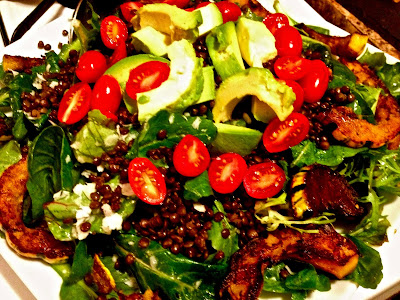 salad with squash. and other treats.
first you must become friends with jodie because jodie will introduce you to things like delicata squash, which is better than any other kind of squash in the world, and once you try it you will be hooked and you will spend an entire fall making things with it and stuffing it with other things. cut the squash up into thin semi circles and pan fry them in a little olive oil with salt and pepper until they're tender and brown. cook beluga lentils in veggie broth. toss some delicious, sweet greens in a light, lemony, mustardy vinaigrette and add the lentils and the squash. throw some tomatoes and avocado on top, too. eat this while sitting on the couch. sometimes dinner should be eaten on the couch. 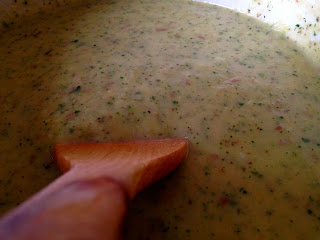 roasted potato leek soup. sometimes it's cold out.
when it's really cold out and you need some comfort, chop up some red potatoes and leeks and roast them with olive oil and salt and pepper. saute garlic and celery in olive oil and add the potatoes and leeks. cover with veggie broth and cook for a while. blend it all together and add some cream for an indulgent little treat. we all need cream in the winter. 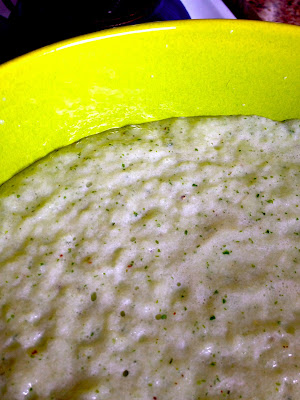 cucumber mint soup. sometimes it's hot out.
when it's really hot out and you don't feel much like eating, seed some cucumbers and throw them in a blender with some greek yogurt and mint. add vinegar, salt, pepper, and garlic salt to taste. it's like an air conditioner in your mouth. 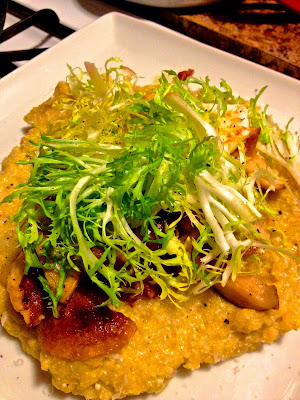 root vegetable puree with sauteed mushrooms. for those awful hump nights.
put some celery root, parsnips, and garlic in a pot. add salt and pepper. pour some veggie broth in. cook until the veggies are tender enough to puree. puree them. add a little ricotta. plop it on a plate. saute mushrooms--i'm really into shitake right now--in a little butter and add a dash of marsala or sherry vinegar or just plain old red wine if that's what you have and some salt and pepper until they're tender. put them on top of the veggie puree. toss some crunchy greens like frisee in a little lemon juice to top it off. the weekend will be here soon. 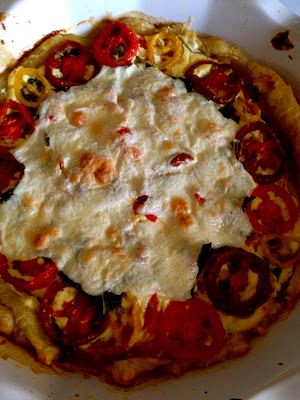 tomato pie. why not?
combine goat cheese, cream or half and half, and an egg yolk and add salt and pepper. slice really delicious, ripe tomatoes. roll out pastry dough and put it in a pie tin. layer the tomatoes and the cheese mixture a couple times. cover with mozzarella and bake until the dough looks done. bring on a picnic if you can. 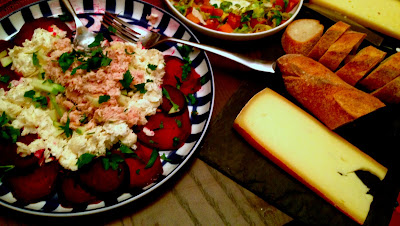 smoked trout. and other things on a plate.
roast some beets then slice them thin and pour a little red wine vinegar over them. grate celery root and add greek yogurt, salt, pepper, celery salt, and a squeeze of lemon juice. spread over the beets. chop some green apple. julienne it if you wanna get fancy. put it on top of the celery root. combine smoked trout, lemon juice, and horseradish in a bowl. add salt and pepper. add this to the plate. chop some parsley and sprinkle it over everything. sometimes things just go together. 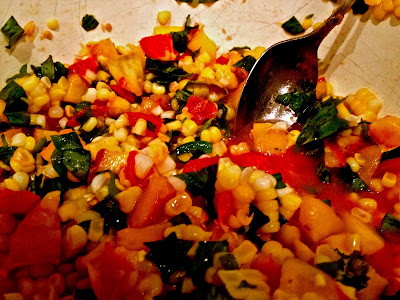 summer in a bowl salad.
boil some corn. cut it off the cob. chop some tomatoes. chop some peaches. chop some basil. combine everything in a bowl. add salt and pepper. smile. sigh. 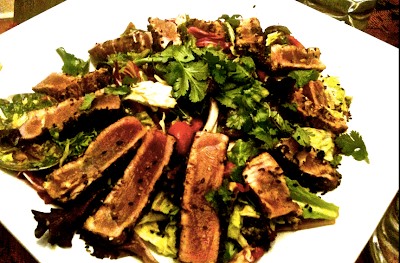 seared tuna salad. or seared tuna ON salad?
chop ginger and garlic and add soy sauce and rice wine vinegar and lime juice and salt and pepper and marinate a nice piece of sushi grade tuna in this mixture. throw together some greens and avocado and tomato and cucumber and edamame and make a dressing out of tahini, lemon juice, rice wine vinegar, and a dash of soy sauce. or just use store bought ginger carrot dressing. dip the marinated tuna in sesame seeds--black ones if you've got them--and pepper and sear in a pan with sesame oil for just a couple minutes on each side so the inside stays nice and rare. cut it up and place it around the tossed salad. top with cilantro. throw some chinese noodles on top if you keep them around after not eating them with hot and sour soup. feel fancy. 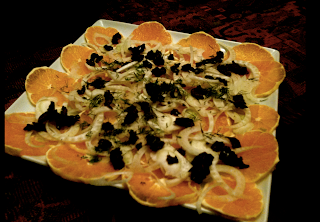 orange fennel salad. sometimes you need a detox.
thinly slice some oranges and spread them on a plate. cut fennel into thin ribbons and put this on top of the oranges. chop up some salty black olives and dollop them all over the plate. drizze with olive oil, salt, pepper, and chopped fennel fronds. feel grateful for citrus. and for syd lipset, who gave me this recipe.