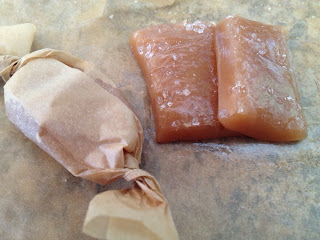 i am not irish. not even close. but i've got a soft spot in my heart for st. patty's day. it's not about the booze, though i do enjoy a good irish whiskey, some guinness, and even bailey's irish cream. or at least i did before i was pregnant. i didn't grow up celebrating in any way (though i believe as a child i dutifully wore green to avoid being pinched). in fact, the only person in my family who acknowledged the holiday was my extremely jewish paternal grandmother. every year, until her death when i was a junior in college, i got a card from her on st. patty's day. valentine's day, too. for her, it wasn't about the holidays themselves. it was about the cards. she had an entire bureau filled with greeting cards collected over the course of i don't know how many years. this bureau was a treasure chest and a great source of entertainment to me as a child. i can easily recall sitting on the floor rifling through the endless supply of birthday, new years, get well soon, and otherwise generically good wishes, utterly fascinated and impressed by the collection. 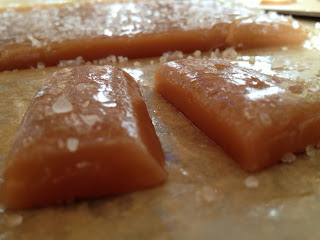 so there was that.

and then there was the year i got engaged. josh and joey and i went with my old roommate and dear friend jessie (i know. it's a lot of j's) to a st. patty's day party one of her coworkers was throwing. two important things happened at the party: the game taboo and dancing. when someone busted out taboo (if you don't know what taboo is you should find out. it's a wonderful game, which i will not try to explain for fear my description will be irreversibly confusing.) josh and joey and i formed a team. not just any team. the winning team. but we didn't just win. we obliterated the competition. everyone was impressed. i was excessively proud. the dancing came later. parties with dancing are the best kinds of parties. at some point someone put beyonce's "single ladies" song on and we all danced to it. (if you're not familiar with this song, you do not live in this universe. it contains the line "if you liked it then you should have put a ring on it.") there's a picture of me pointing to my ring finger while dancing, which, in retrospect, could be embarrassing but isn't because there are about five other girls in the picture making the same gesture. my oh-so-serious-boyfriend just happened to be feet away. and he just happened to have my engagement ring IN HIS POCKET. and it just so happens that an hour or so before we left for the party he had called my parents to ask for their blessing... don't worry. he didn't propose to me at this random-coworker-of-my-roommate's party after we danced to this song. it happened the next morning and it was quiet and private and only ours. but you can see why i have a soft spot for st. patty's day. 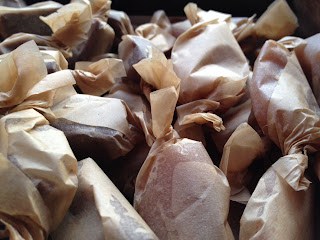 this year, my friends matt and kate invited us over for an irish inspired st. patty's day dinner. at seven-and-a-half months pregnant i'm eating with abandon and having dinner is a pretty exciting event in and of itself, but having dinner with friends was an even happier prospect. so i did what i always do when i'm happy, which is concoct things. irish things. with alcohol.

i started with this betty crocker recipe, which i got a kick out of, and tweaked it only slightly. if you click on the link you will see that the recipe calls for honey flavored whiskey. what is honey flavored whiskey you ask? i haven't a clue, nor could i ever have justified purchasing an entire bottle of it for a first time candy making endeavor. so i improvised. 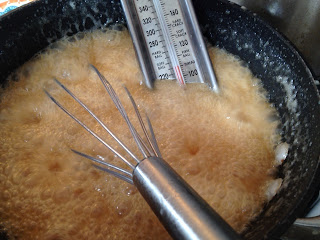 to make the salted whiskey caramels:
1. line a 9x9 pan with parchment paper and spray it with a ton of cooking spray.
2. in a small pot heat the butter, cream, whiskey, vanilla, and salt and stir it frequently until it boils, then remove it from the heat. 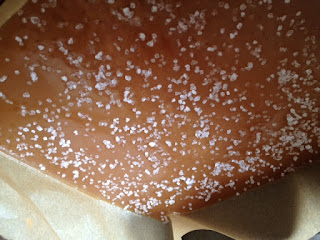 3. in a large pot (i learned this the hard way by using a medium pot. things spilled over. scrubbing the stove top happened.) mix the sugar, corn syrup, and water and heat it on medium-high heat but don't stir it! this is hard because it's fun to stir things on the stove top. heat it until it reaches 310 degrees F. (have i mentioned i have a candy thermometer? well i do. my aunt got it for me and i love it and feel very sophisticated and serious when i'm using it.) this takes a while, and if you're impatient like i am you will stare at the thermometer and wonder why it's not getting hotter faster.
4. when the sugar mixture finally reaches 310 degrees F add the cream mixture. (this is where my spillage happened.) beat it with a whisk and stare at the thermometer again until it reaches 248 degrees F. at least now you have something to do while you wait!
5. pour the caramel into a pan, wait 10 minutes, then sprinkle the sea salt over the top. you can add as much or as little as you like, but i think 1/2 tbsp is the right amount. i added too much and ended up scraping some off. stick the pan in the fridge and let it cool completely before cutting. i'll get to that later.

somehow salted whiskey caramels just didn't seem like enough. i wanted to keep going with the whole candy making thing, so i moved on to bailey's irish cream, which is like a dessert in and of itself. i found and tweaked this recipe and a now i have a new favorite cooking blog! 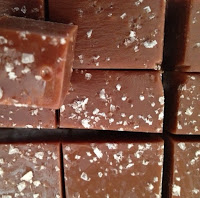 1. line a 9x9 pan with either parchment paper or aluminum foil and spray it generously with cooking spray.
2. combine the heavy cream, irish cream, sugar, and syrup in a large pot and heat over medium high heat until it boils and reaches 250 degrees F. remove it from the heat and let it sit for five minutes.
3. when the five minutes are up, stir in the chocolate chips and pour it into the pan. sprinkle it with salt and then stick it in the fridge to cool completely before cutting.

to cut the salted whiskey caramels and the irish cream chocolate fudge caramels:
1. do not do anything even remotely similar to what i did. i don't know why the simplest tasks are sometimes the hardest for me. i think it's fair to say that no two pieces of candy turned out the same size. and i was cutting a SQUARE. 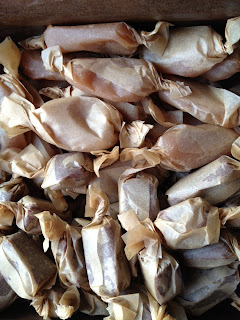 the truth is, the sizes of the candies didn't matter. i even wrapped each one individually in parchment paper, which is one of the fanciest things i have ever done. the dinner was delicious, the company made it all the more so, and the candies were a hit!
Labels: candy caramel chocolate dessert liquor