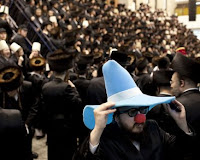 purim was today. every purim i feel a little sad, which is sort of silly, because it's a perfectly fun holiday. we read the story of esther and make a lot of noise. we eat a big meal. we give fun little packages of food to our friends and family. we offer charity to those in need. we get to dress up in fun costumes and we're even encouraged to get so... festive... that we can't tell the difference between the bad guy in the story, haman, and the good guy, mordechai. so i really quite enjoy celebrating the holiday.

they're hard, dry, bland, brick-like things filled with jam--or worse, poppy seeds--called hamentashen. they're shaped like triangles because haman's ears were supposedly very pointy. (doesn't that make for a great sounding villain!?) and every year it's the same thing. i think, okay, maybe this is the year i'll start loving hamantashen. in the past decade i've acquired other tastes. coffee. wasabi. raisins. so who's to say i won't acquire a taste for hamantashen one year? but this wasn't the year. don't get me wrong, some are better than others. my mother-in-law makes a pretty mean hamantashen dough. but still, i'd rather have her chocolate chip cookies. or anyone's chocolate chip cookies for that matter.


so i decided this year i had to reinvent the hamantashen. or at least experiment with reinventing the hamantashen. and thus the great hamentashen project came into being. it began on sunday afternoon and ended late sunday night, and after i don't know how many hours of standing and mixing and cleaning and baking and cooling and transferring and sampling later, i had finally finished. the result was actually sort of scary. it turns out that five large batches of hamantashen is a lot of cookies for one house. 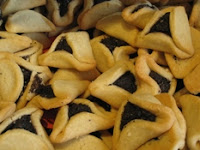 regular hamantashen recipes take a lot of precision. i'm not very good at precision, so i decided to start with regular cookie recipes. and all of the regular cookie recipes i chose were selected based on one ridiculous criterion: the pictures. if the cookies in the pictures that accompanied the recipes i was browsing looked a certain way i decided the dough would be thick enough to shape into circles, fill with stuff, pinch into triangles, and keep the nice shape while baking.

not so much. the great hamantashen project=a lot of recipe tweaking. i basically ended up adding 1/4 cup - 1 cup flour and sugar to each recipe to get the dough thick enough to work with. i also stuck the dough in the freezer to harden for a few minutes while batches baked. so none of these recipes are entirely exact, which i know is sacrilege in the world of baking. but sometimes you just have to go with it. this was an experiment, after all. 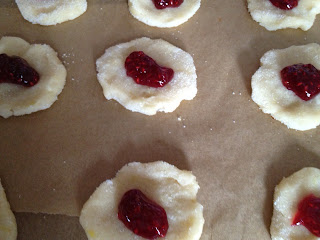 i started simply enough with with a lemon cookie, which i knew i wanted to fill with raspberry jam.  then i remembered i had some sweetened coconut flakes and it seemed utterly necessary to add them.
ingredients for the lemon coconut raspberry hamantashen: 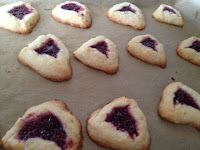 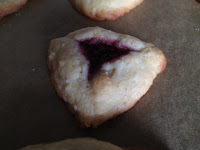 2 sticks softened
1 egg
1 teaspoon vanilla
ingredients for the filling:
your favorite raspberry jam
to make:
1. preheat the oven to 350 degrees F.
2. combine the flour, baking powder, and salt in a small bowl and mix them together.
3. combine the sugar and lemon zest in a small bowl and rub them together with your fingers.
4. beat the butter and sugar/lemon zest mixture and add the egg, vanilla, and coconut. keep beating until it's smooth.
5. slowly add the flour mixture to the sugar mixture.
6. take walnut sized balls of dough and use your palm to flatten them in sugar. coat both sides, then transfer to parchment lined cookies sheets. add a dollop of raspberry jam to the center, then pinch the sides up over the jam to form a triangle, leaving a bit of the jam poking out the center.
7. bake for 12-14 minutes or until they're golden brown. 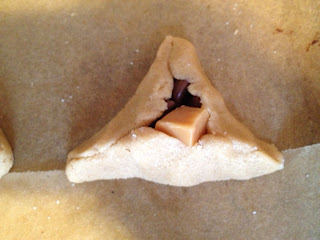 from there i moved on to peanut butter cookies, which i knew i wanted to stuff with chocolate and caramel.
ingredients for the cookies:
1 3/4 cups flour
3/4 tsp baking soda 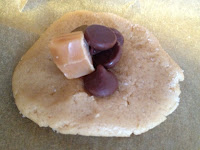 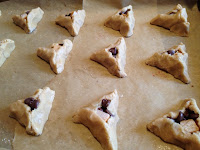 1/2 cup chocolate chips
soft caramel candy squares, cut into quarters
to make:
1. preheat the oven to 350 degrees F.
2. combine the flour, baking soda, and salt in a small bowl.
3. combine both sugars with the butter and beat for a few minutes, then add the egg, vanilla, and peanut butter.
4. add the flour mixture to the sugar mixture until just combined.
5. take walnut sized balls of dough and use your palm to flatten them in sugar. coat both sides, then transfer to parchment lined cookies sheets. add about 4 or 5 chocolate chips and a quarter of the caramel candy square to the center of each circle, then pinch the sides to form a triangle with a little bit of the filling poking out.
6. bake for 12-15 minutes, or until the cookies are lightly browned. 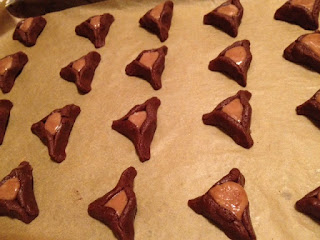 while those were cooling i started on the chocolate cookies. i used my go-to chocolate cookie recipe, which is pretty thick as it is, so it only needed a little tweaking. i paired them with mint because who doesn't like chocolate and mint?!
ingredients for the cookies:
12 tbsp softened butter
1 1/2 cups flour
2 eggs
1 1/2 tsp vanilla extract
2 cups sugar 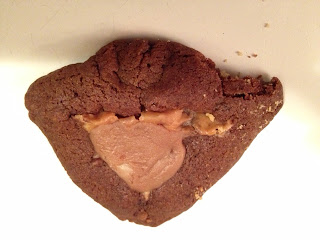 1 cup cocoa powder
1/2 tsp baking soda
1/2 teaspoon salt
2 tsp instant coffee
ingredients for the filling:
3/4 cup white chocolate chips
1/2 cup dark or milk chocolate chips
1/4 cup cream
1 tbs butter
1/2 tsp mint extract
pinch of salt
to make:
1. start with the filling. melt the butter over medium heat and add the cream. stir in the chocolate chips until they are about half melted, then remove from heat and stir in the salt and mint extract until everything is melted. refrigerate while preparing the cookie dough.
2. preheat the oven to 350 degrees F.
3. beat the sugar, eggs, and vanilla in a large bowl until they look fluffy.
4. stir the flour, cocoa powder, baking soda, salt, and instant coffee in a separate bowl and then add this mixture to the butter mixture until it's all combined.
5. flatten tablespoon sized gobs of batter onto parchment lined cookie sheets. drop teaspoon sized amounts of the filling into the center of each cookie and then pinch the sides to form a triangle, leaving a bit of the filling poking out.
6. bake for 8 to 10 minutes. the mint mixture bakes into the cookies a bit, so you might want to top it off with another teaspoon as the cookies are cooling. 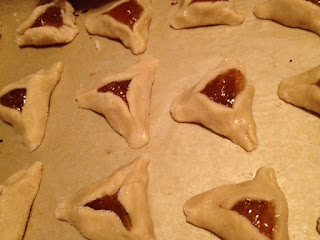 after that i was ready for the ricotta cookies. i've never made ricotta cookies before so i wasn't quite sure how this would go. turns out this batter took the most tweaking (like removing the lemon flavor and adding the most flour and sugar), but the result was shockingly moist!
ingredients for the cookies:
3 1/2 cups flour
1 teaspoon baking powder 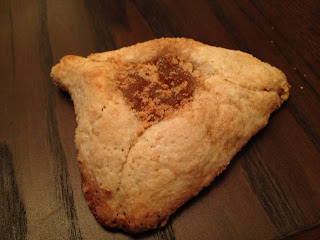 to make the cookies:
1. preheat the oven to 375 degrees F.
2. combine the flour, baking powder, and salt in a small bowl and set aside.
3. beat the butter and sugar in a large bowl for about three minutes then add the eggs, ricotta, and balsamic vinegar. slowly add in the flour mixture and beat until combined.
4. take walnut sized balls of dough and use your palm to flatten them in sugar. coat both sides, then transfer to parchment lined cookies sheets.
5. add a dollop of fig jam to the center of the circles, then pinch the sides up over the jam to form a triangle, leaving a bit of the jam poking out the center.
6. pour balsamic vinegar into a small cup and then lightly brush each cookie with a small amount.
7. bake for 12-15 minutes, or until golden brown. 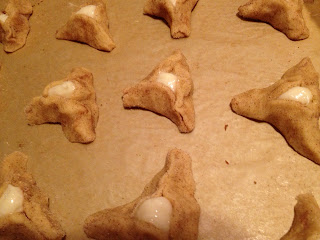 for my final hamantashen of the evening i went for cinnamon cookies with a maple cream cheese filling. a little bit of a fall throw-back, but the flavors just go so well together! 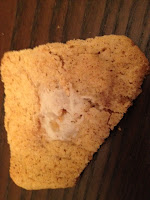 ingredients for the cookies:
2 1/2 cups flour
1 tsp baking powder
1 tsp baking soda
1/4 tsp salt
2 cups sugar (plus another 1/2 cup for flattening)
2 eggs
1 tbs ground cinnamon (plus another 1 1/2 for flattening)
ingredients for the filling:
1/2 cup cream cheese
3/4 cup powdered sugar
3 tbs maple syrup
to make:
1. start with the filling. combine all ingredients and mix until combined, then let harden in the fridge while working on the dough.
2. preheat the oven to 350 degrees F. combine the flour, baking powder, baking soda, and salt in a small bowl and set it aside.
3. beat the butter and sugar for about three minutes, then add the eggs and cinnamon. slowly add the flour mixture and beat until combined.
4. combine the sugar and cinnamon reserved for flattening in a bowl and take walnut sized balls of dough and use your palm to flatten them in the sugar and cinnamon. coat both sides, then transfer to parchment lined cookies sheets.
5. dollop the maple cream cheese mixture into the center and fold the sides up to form triangles, leaving a bit of the filling exposed.
5. bake for 8-10 minutes. these cookies spread the most and looked the least triangular so i ended up shaping them a little by cutting rounded sides off with a knife. 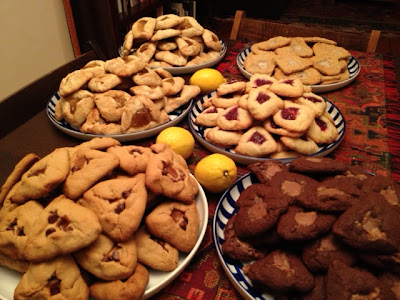 by the end of the hamatashen project i could barely stand up anymore. hamantashen were everywhere. everywhere! they covered our entire table and stovetop. and we still had to stuff them into little baggies to distribute to family and friends! josh was very helpful with the assembly line, and even more helpful because he gave me a post-hamantashen project massage while we watched the first episode of downton abbey. (i finally know why everyone is raving about that show!) josh took most of them to school the next day and i think that every single person he saw got a bag! i brought them to work and even sent some in the mail... and there are STILL a few hanging out in our apartment... 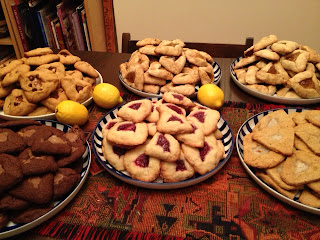 so, though this project proved slightly ridiculous in the end, and i can really only claim that the cookies might be identified as part of the triangle family, it made me happy to give out soft, moist, interesting, non-brick-like hamantashen to family and friends. but next year i'm only making one kind. i've already decided. 'smores hamantashen!!!!