from winter to spring: a tale of two breads

about a month ago josh and i went to charleston for the weekend. josh had never been and i hadn't been since i was quite young. all i remembered was water and mansions. a very good combination. good enough, even, to warrant a this-may-be-the-last-trip-we-take-just-the-two-of-us-for-a-very-very-very-long-time getaway. besides, the plane ride isn't all that long. it's not a terribly expensive city. the weather is generally good. the architecture and the history are incredible. and the food scene is exploding. it was a sensational weekend. josh and i are perfect travel partners and every moment of a trip to a new(ish) place with him is an adventure, whether we're out exploring historical sites or resting in front of the fireplace in our hotel room. (yes. our hotel room had a fireplace.) we certainly did our fair share of site seeing and wandering (i think i spent an entire day pointing at things and saying "oh! isn't that just beautiful! oh, look at that house! i wonder how old it is! oh, look at that gate! don't you just love it here? oh, i think we could live here!) and we even visited a plantation where we saw a lot of spanish moss and alligators. 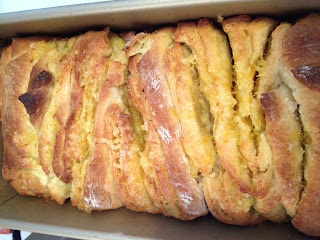 but the real highlight was the food. and boy, did we eat. and eat. and eat. in fact, on our last full day there we couldn't decide between two restaurants for lunch, so we ate at both of them. i kid you not. and this is the south. the portions aren't exactly small. i'm not going to tell you everything we ate and how incredibly, mind-bogglingly delicious it all was, because i think everyone should go there and taste for themselves. but i am going to tell you about the bread we ate a hominy grill, where we went for breakfast directly before heading to the airport to fly home. we picked this spot because our dear friend albert, a tennessee native, who has made it abundantly clear on multiple occasions that he believes it is by the grace of god that he was born a southerner, told us we must. though we ordered neither the big nasty biscuit w/ fried chicken breast, cheddar cheese and sausage gravy, nor the shrimp sauteed w/ scallions, mushrooms & bacon over cheese grits, two of the establishment's specialties, we still managed to do pretty well for ourselves without violating the laws of kashrut. it was the ginger pumpkin bread that did it. two perfectly thick, moist, buttery slices of freshly baked, obscenely flavorful bread reminiscent of fall and winter and warmth and happiness. it was served with sticky sweet strawberry jam reminiscent of spring and summer. 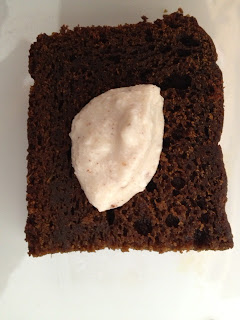 we stared at each other after our first bites. and then we talked about it while we were eating it. and on the way to the airport. and on the flight home. and for days and weeks afterward. i knew there had to be a recipe out there somewhere that would satisfy our craving for this southern delicacy. so last weekend, when josh's parents, aunt, uncle, and cousin all descended on brooklyn for the weekend just in time for a shabbat brunch on saturday morning, i knew i had the perfect audience for my first attempt to recreate the heavenly bread. i chose this recipe for no particular reason and made a few small adjustments while i was making it on friday. 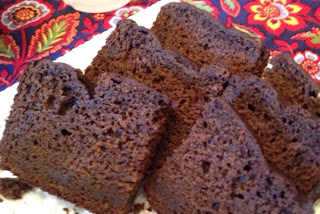 to make the pumpkin gingerbread:
1. preheat the oven to 350 degrees F and spray a loaf pan with pam or butter it all over.
2. combine the flour, salt, baking soda, ginger, cinnamon, and nutmeg in a small bowl.
3. whisk the pumpkin, butter, sugar, molasses, fresh ginger, eggs, and water in a larger bowl.
4. add the dry ingredients to the wet ones and whisk them in until combined.
5. pour into the loaf pan and bake for 50-60 minutes, or until a toothpick inserted in the center comes out clean. let it cool, then remove it from the pan. 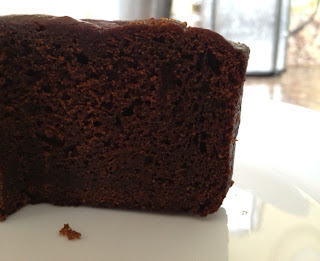 i may have "accidentally" tasted the batter and i could already tell it wasn't going to be anything like the hominy grill pumpkin gingerbread. for one thing, it was extremely dark, which i think was the result of all that molasses. the pumpkin flavor was almost forgotten in the midst of the spicy ginger kick. but it was still good, and i was pretty confident the finished product would be moist and delicious and flavorful in its own right, though i realized just how wintery it was going to be. i wanted to take the edge off the ginger with something, so i concocted a lovely spread to add lightness and sweetness to each bite. i checked out my fridge and pantry and found just the right ingredients to throw something together.

ingredients for the spread: 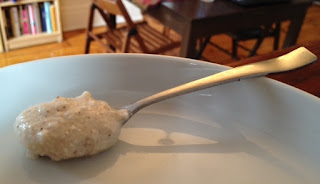 to make the spread:
i didn't measure anything and you don't need to either. start with the ricotta as a base and then add the fig jam a little bit at a time. add the other ingredients after the jam and stir them in and taste it. if you think it needs more honey, add more honey. if you think it needs more cinnamon, add more cinnamon. you get the idea.

i knew the combination was going to work. and it was going to compliment the rest of the brunch, which consisted of challah, my favorite fruit salad of strawberries, green grapes, watermelon, kiwi, and banana, olive bread toasts with spicy egg salad, lox, capers, and dill, crustless quiche with leeks, mushrooms, basil, and goat cheese, and spinach and micro green salad with grape tomatoes.

but then something happened virtually overnight and it changed everything, including the course of the brunch. it was the best thing in the world. spring. i know we've had an extraordinarily mild winter, and believe me, i'm very grateful for that fact, but spring's arrival announced itself unmistakably, creating a clear separation between the seasons. and in fact, spring arrived just as daylight savings graced us with that delicious extra hour of sun, which is a particularly essential thing for those of us who work in windowless offices and spend november through march leaving said offices well after the sun has set each day. 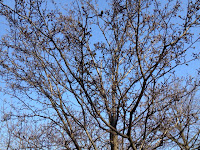 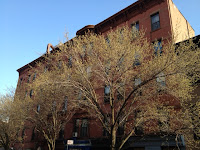 spring. even the word makes me feel light and happy.

but the pumpkin gingerbread was anything but springy. so on saturday morning i woke up extra early and crept out of bed to make another bread that would honor the glorious air. lemon pull-apart bread. i tweaked this recipe. 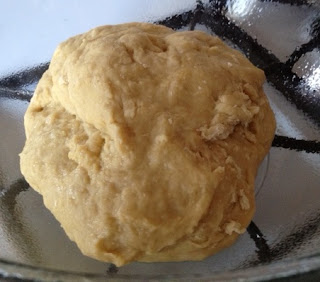 ingredients for the icing:
1/3 cup softened cream cheese
juice of half a lemon
1/3 cup powdered sugar

to make the lemon pull-apart bread:
1. combine 2 cups of the flour, the sugar, yeast, and salt in a large bowl.
2. heat the cream and butter over low heat until the butter melts, then remove it from the heat, stir in the water, let it sit for about a minute, and add the vanilla.
3. pour the cream mixture over the dry mixture and combine with a rubber spatula. add the eggs one at a time and mix them in by hand. add the remaining flour little by little until the dough is smooth. it'll be sticky, but that doesn't mean you need to add more flour.

4. put the dough in a large greased bowl, cover it with plastic wrap and a tea towel and let it rise in a warm place for about an hour, or until it has doubled in size. my oven was on and i let the dough rise on top of it to help speed the process along.
5. when the dough is ready, deflate it on a clean counter. or you can leave it in the fridge overnight and bake the bread in the morning. apparently it's easier to work with the dough when it's a little chilled, but i had about an hour and a half to go before everyone was going to arrive and i didn't have time for that! 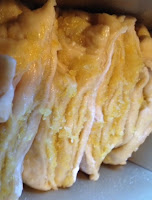 6. roll out the dough so it's about a 12x20 inch rectangle (i obviously didn't measure it). combine the lemon zest and sugar for the filling and melt the butter. use a pastry brush to spread the melted butter all over the dough, then cut it down into five 12x4 strips. spread 1/5 of the lemon zest mixture on a rectangle of dough, then stack another strip on top of it and repeat. generously butter a loaf pan or line it with parchment paper. slice the dough stack into 5 equal sections that should be about 2x4 inches each and fit them into the loaf pan with the cut sides down. cover the loaf pan with plastic wrap and a tea towel and let it rise for about 45 minutes, or until it was almost doubled in size again.
7. bake for 30-35 minutes, or until the top is golden brown. let it cool for about 10 minutes and then remove it from the pan.
8. stir the cream cheese, lemon juice, and powdered sugar and drizzle it over the bread. you can serve it by pulling pieces away bit by bit, or cutting into the bread. your choice. 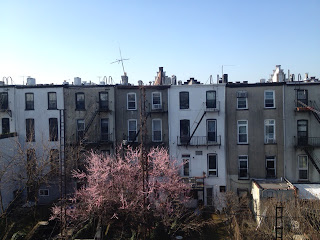 we had a wonderful weekend with josh's family, and though we had bagels for brunch the next day, there was still enough of both breads to go around. eating the pumpkin gingerbread with the ricotta spread was like cozying up on a comfortable couch under a warm blanket with your beloved husband on a blustery winter day. eating the lemon pull-apart bread was like walking around your beautiful neighborhood without a coat and seeing those first dreamy signs of life. bright yellow daffodils. deep purple crocuses. fresh green leaves. soft pink buds. biting into one and then the other was a fun, edible way to mark the glorious transition from winter to spring.
Labels: bread dessert gingerbread lemon