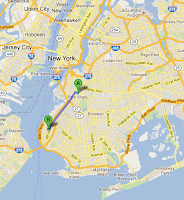 a few years ago my parents came to visit and joey insisted we schlep all the way out to bay ridge to eat dinner at a restaurant called tanoreen i'd never heard of. it's not that bay ridge is all that far. but it feels far. my suggestions for local thai and italian were rejected. he kept saying that the restaurant was one of new york magazine's best cheap eats in the city. and BYO. these are compelling reasons. but the most compelling of all was the menu.

middle eastern food. made by a woman from nazareth.


i'm suspicious of middle eastern food in the states. even in new york. sure, there are plenty of places to pick up a decent enough felafel, but truly authentic, utterly delicious fare is actually pretty hard to come by. granted, i've been absolutely spoiled by my years in israel, and my standards are unfairly high, especially for hummus, one of the single greatest foods in existence. but when you've spent countless hours wandering the unendingly complicated and narrowly winding streets of the 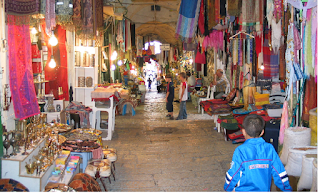 arab quarter of the old city in jerusalem, which are as filled with overloaded wheelbarrows from an unrecognizable era that thump their way down the descending, aged steps as with fighting drivers impossibly squeezed and facing off on the the confined paths with no way in or out, searching, as i have, for that one specific hummus place, the others just won't do. because you know it's here somewhere, past these particular jewelry stalls (oh, aren't those necklaces stunning?) and down these stairs from those leather sandals (and oh, don't they always look lovely on tanned feet?) and around the corner from those specific tapestries (but oh, didn't you always want a large red one?) and just beyond those mounds of spices (oh, oh, oh, aren't the turmeric and saffron and paprika works of art you want to stand near and smile at all day?) and you know that eventually you will find it and you will sigh with joy as you compress your aching body between the crumbling wall and the unsteady table, still littered with the previous patron's ineffectively small napkins and plates wiped so clean they reveal nothing about the food consumed, until a boy, a 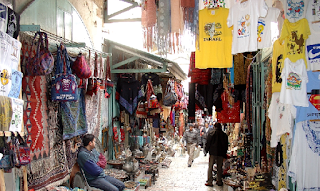 son? grandson? wipes it down with a rag you choose not to look at because there is no such thing as the department of health in these walls, before bringing you a plate of sliced tomato so rich with flavor and juicy that every bite sends a dribble of sweet nectar out of your mouth, pickles so wonderfully garlicky they send a delightful shock down your throat, and olives so perfectly cured you have to ration them for fear you'll get your fill on these alone and you order immediately, for there are no menus here. there's hummus. and when it comes out, it's the most enticing bowl of food you've ever seen. this dish covered in hot, meaty fava beans, that one covered in lemony chickpeas, a third in green tehina, all of them sprinkled with unnamed spices and chopped herbs and drenched in olive oil. the pita so fresh and hot it burns your fingertips as you rip it, plunge it into the hummus, and take your first heavenly bite. 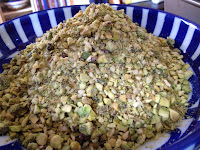 but joey was right. and the hummus at tanoreen is superb. and so is the rest of the food, for that matter. so when my parents came to visit again recently to celebrate my mom's birthday, i was the one who recommended tanoreen. and i didn't even have to schlep all the way to bay ridge to eat it because joey and my dad picked it up and brought it to my apartment and my one responsibility was dessert. sometimes things just work out perfectly. i decided to make baklava. before dinner, the layers of flaky phyllo dough and cinnamony pistachio saturated with sticky honey spice syrup seemed overwhelmingly sweet. after dinner, they were perfect.

i used this recipe, but i changed it a bit. first of all, i halved it, because i am not insane. even i cut baklava into small pieces and can only eat a few. and i am someone who can, single handed, eat all of the frosting off an entennman's chocolate fudge cake. but baklava is something else, and even after i halved the recipe we still had lots left over.

to make the baklava:
1. start with the syrup. stir the sugar, water, lemon juice, cinnamon, cloves, and cardamom in a pot over low heat until the sugar dissolves, which should take about five minutes. turn the heat up and cook another five minutes without stirring. it'll turn into a nice golden brown syrup. remove it from the heat and let it cool.
2. preheat the oven to 350 degrees F and grease an 8x8 baking pan with butter. combine the pistachios, almonds, sugar, and cinnamon in a bowl.
3. place a sheet of phyllo in the pan and brush it with the melted butter and then repeat this step seven 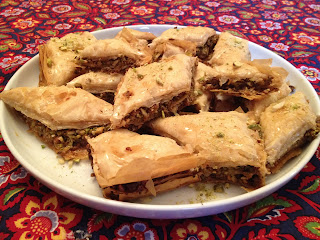 more times. don't worry if you lose count, which i obviously did. when you think you've gotten to eight sheets, spread half of the filling evenly over the dough. repeat the same steps again. phyllo. butter. eight times. then the rest of the filling. then the phyllo. butter. eight times thing again. don't put any butter on the very top. instead, sprinkle it with a little bit of water because apparently this keeps it from curling.
4. cut equal strips through the top layer of pastry and then make diagonal cuts across them to make diamond shapes. or not. or can not fully follow directions and instead cut all the way through all of the layers of dough and nuts in shapes that only vaguely resemble diamonds. cause that's what i did.
5. bake for 20 minutes, then reduce the heat to 300 degrees F and bake for another 15 minutes or so, or until the top is golden brown. then, cut through the scored lines (or not if you're bad at following directions like i am. slowly drizzle the syrup over the baklava, in and out of the cuts and around the sides. i actually didn't end up using all of mine because it looked fully saturated about 3/4 of the way through the syrup.

6. let it cool for a few hours and then sprinkle it with some ground pistachio before serving if you're feeling fancy. 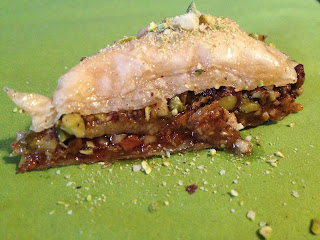 since you only really need a small piece, we had plenty of baklava to enjoy with the tanoreen leftovers for days to come...
Labels: baklava dessert middle eastern