a couple moths ago a friend and i began sending each other fall recipes we found on various food blogs. back and forth they went. we cyber oohed and aahed over the cinnamon and the pumpkin and the apple, the hot cider and the ginger and the maple. and then one day we came up with a brilliant idea. a fall dessert party. an opportunity for us to make all these recipes we'd been drooling over for weeks without being saddled with the responsibility of eating them all. it was a grand success. she made: mulled wine, chocolate pumpkin bundt cake with a toffee glaze, chocolate drizzled, twix studded popcorn, and a two layer pumpkin cake with cinnamon icecream. the ice cream cake was a dream. it was vegan. and no one knew. i made: hot spiked cider, ricotta toasts with cracked black pepper, arugula, and pear slices, ginger chocolate blondies, sugar and spiced nuts, apple spice caramel cupcakes, and pumpkin spice donut holes. the donut holes were a great culinary achievement for me, thrown together a mere 30 minutes before guests were due because i found the ginger chocolate blondies... well... not all that good. an embarrassment. and while the blondies sat forgotten in the corner, the luscious, spicy little balls of pumpkiny, sugary goodness dripping with cinnamon and sugar were very, very well received. i decided to make them again last night for a work friend about to go on maternity leave. donut holes=small donuts=baby donuts=a good food gift for someone about to have a baby.

something you should know: when i was 16 i got a summer job at a movie theater because the boy i had a crush on also worked there. needless to say, this was a mistake. and though other friends also got jobs at the same theater, and though i could see all the free movies i wanted and eat all the free popcorn and drink all the free soda i wanted, it just wasn't worth it. and the reason it wasn't worth it was because of the oil. every evening during rush enthusiastic moviegoers would gleefully ask for the popcorn that was just then being popped. the hot kernels of salty deliciousness. they had no interest in the perfectly good, albeit hours-old popcorn resting nicely on the side of the machine, easily, safely within my reach. oh, no. they wanted the fresh stuff. and i had no choice but to oblige, daringly placing myself directly next to the heart of the machine as it delivered the popcorn, which i scooped up as quickly as i could while desperately, unsuccessfully trying to avoid the sputtering oil that came flying out along with the popcorn, targeting my soft, delicate arms. it was a hazard of the job. perhaps the most dangerous i've ever had. as you can imagine, i am now terrified of hot, splattering oil. which is why i don't deep fry things. or at least, mostly i don't deep fry things. last hanukkah i deep fried zucchini blossoms because i was feeling too fancy for latkes. they were delicious, as all things are when they are deep fried, but the effort it took to manage the endeavor without reliving my 16-year-old oil splattering horror, coupled with the dingy, oily smell that lingered in my apartment throughout our dinner made me swear to myself that deep frying at home is something worth doing only once a year. therefore, these donuts were baked, not fried. 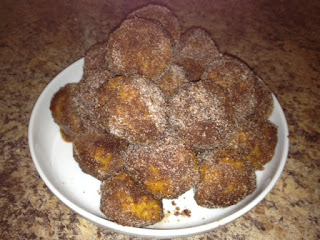 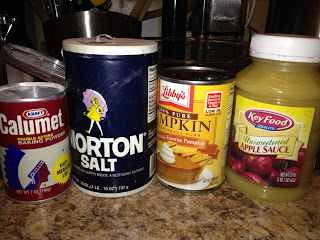 1. preheat the oven to 350 degrees and spray cooking spray, a wonderful invention, all over a 24 cup mini muffin tin.
2. in a smallish bowl, whisk together the flour, baking powder, salt, cinnamon, nutmeg, ginger, and cloves.
3. in a different, bigger bowl, whisk together the apple sauce, brown sugar, egg, vanilla, pumpkin, and milk.
4. dump the dry ingredients from the smallish bowl into the wet ingredients in the bigger bowl and whisk them together until they're just combined.
5. scoop the batter into the muffin tin using a medium sized spoon. if you're lucky like i am, then you have small, medium, and large spoons. fill the muffin cups up about half way.
6. bake them for 10-12 minutes and then let them cool. letting them cool is an important step i didn't have time for the first time i made them, and i was sorry.
i suppose you could stop there and just eat them, but then you'd be missing out on the buttery, cinnamony, sugary goodness that comes next. 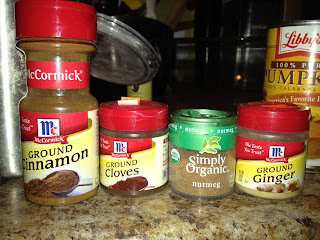 ingredients for toppings:
3/4 stick salted butter
2/3 cup sugar
2 1/2 tablespoons cinnamon
7. melt the butter.
8. combine the cinnamon and sugar.
9. squish the little muffin shaped donuts in your hands and roll them around until they resemble donut holes instead of mini muffins. it will work. trust me.  after reshaping each one, dip it in the melted butter until it's covered, then roll it in the cinnamon and sugar mixture until it's perfectly coated. repeat with all 24. 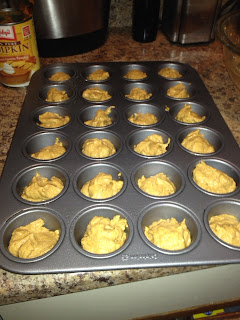 then EAT the happy little donut holes and be grateful for fall!!!