when jake and joey and i were young my dad used to tell us stories before bedtime. sometimes the stories were about the amazing adventures of three daring, heroic children named jake, nani, and joey, who went around saving lives and stopping crime. other times he told us what came to be known as "true new funnies" which were stories from his own childhood, more often than not about embarrassing and ridiculous things his own aunts and uncles had done, that left us rolling on the floor in hysterics. once, he told us a true new funny about the time he ordered a pretzel on a new york city street corner when he was a child. he watched, mouth agape, as the pretzel vendor took my dad's order--a single, deliciously chewy and salty pretzel--then paused to sneeze gigantically, colossaly into his own bare hand before reaching for my father's treat, hanging innocently behind the protective glass with the very same hand. i'll spare you the details of the rest of the story, which i'm sure were hilarious enough to have us all in tears, but not damaging enough to prevent me from buying food from street carts. some things are just too delicious. pretzels and street cart nuts are two of those things. 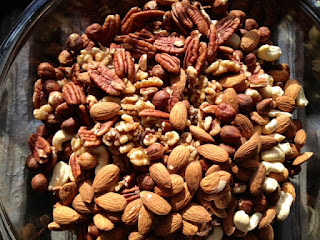 one of the wonderful things about new york city during the period when fall turns to winter is the nuts. just the smell of them makes me nostalgic for christmas. the lights, the carols, the wrapping paper, the cheer. and i'm jewish. and not even hanukkah bush jewish. married to a rabbinical student jewish. but there's something magical about new york in the holiday season, by which i mean thanksgiving through new years, and i only hope that the tourists who come pouring in to the city during this time period go home with a sense memory of the smell of those steamy, sweet, soul-warming street-corner nuts. because then they'll be fond of new york forever. this recipe is good inspiration, though i think there's a lot of room for improvisation. and improvisation is the best. 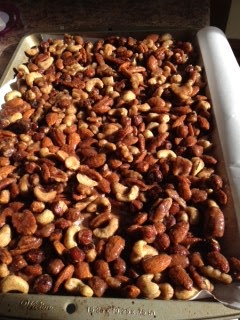 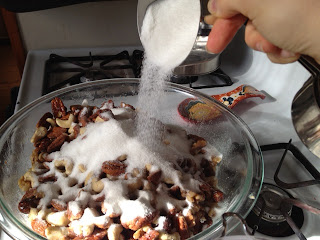 to make the nuts:
1. preheat the oven to 300 degrees F.
2. whisk the egg whites until they break up and start getting foamy.
3. dump all the nuts in the bowl and use your (clean!) hands to mix them into the egg whites, making sure they're all covered. add the sugar and spices and mix them again to coat.
4. spread the nuts on two baking sheets covered with parchment and bake for 30-40 minutes until the nuts aren't sticky anymore. your house will smell like happiness. break them apart and eat them!
i tripled the recipe and put the nuts in jars to give out as thanksgiving gifts, which made people happy. the essence of fall in a jar. how could it not? 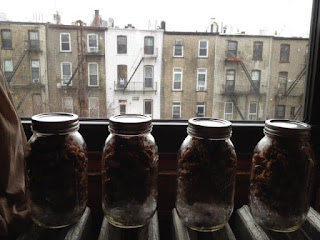