recreating a dream. or trying, at least.

i have always loved baked banana anything. in elementary school my mom always made banana cake for our classroom celebrations. the very smell of banana and sugar in the oven, or even on the stove, comforts and delights me and reminds me of my mom, who is one of The Great People. so it's no surprise that when, a few years ago, we discovered butter lane, a cupcake place in the east village that had perfected the cupcake-to-frosting ratio in what can only be described as heavenly balance, and when i further discovered that they carry three kinds of cupcake bases: chocolate, vanilla, and BANANA, i was ecstatic. well, my life just keeps getting better because a few months ago butter lane opened in park slope, a mere 7 blocks away from me!!!! and it's not just the wonderfully moist, light, fluffy base that makes these cupcakes so perfect. the frosting has a lot to do with it, too. and i'm a big frosting lover. in fact, i believe that cake is often times merely conduit to the frosting. at butter lane you can choose from a variety of about 20 different frostings, ranging from salted chocolate to blueberry to peanut butter to cream cheese, and so on. oh, and the people who work there are extremely kind. josh and i once took a visiting friend there right before closing time and they gave us a bunch of free cupcakes. there is nothing better than a free cupcake! and so, when i was asked to bring something sweet and baked to the book club group i just joined, i immediately decided on cupcakes. banana cupcakes. with chocolate frosting. and a caramel peanut butter glaze. deciding took no time. patching up some silly mistakes took a little bit more time and energy than i'd planned. 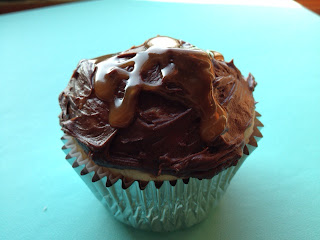 i used this fairly simple recipe for the banana cupcakes, but of course i made some changes.

preheat the oven to 350 degrees.

1. stir the yogurt and baking soda in a small bowl and set it aside. weird things will happen. but it's okay.
2. if you forgot to set the butter out to make it room temperature, soften it in the microwave and then mix it with the sugar until it's creamy.
3. beat in the eggs and the vanilla.
4. mash the bananas and stir them into the weird yogurt.
5. stir the flour, baking powder, and salt.
6. alternate between mixing the dry flour mixture and the wet banana mixture with the butter and sugar mixture. flour. mix. banana. mix. flour. mix. banana. mix. flour. mix. banana. mix. phew. i used to ignore instructions like this and just mix everything all in at once. i'm still not convinced it makes a difference, though i'm sure i'd get in trouble for saying that.
7. fill cupcake liners a little more than 3/4 of the way with the batter. they rise a lot so this batter will make 18 nice, big cupcakes. bake for about 18-20 minutes, or until the top is lightly browned and your home smells like heaven. 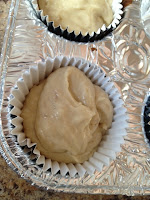 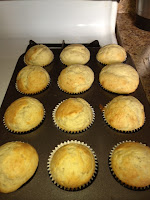 at least... that's what i started with.

1. melt the chocolate over low heat and let it cool for about 15 minutes.
2. combine the butter with the chocolate. step two. a very important step. the one i sort of kind of ignored. let the butter sit out until it softens. i skipped this step. sort of. the butter wasn't softened and i didn't want to wait for it to, so i shoved it in the microwave. the bane of my existence. not only is it way out of my reach and not only do i have to climb on a chair and the counter to use it (as i mentioned in a previous post), it's also temperamental. as in, it often just doesn't work. so i open and close the door and check the plate and unplug it and plug it back in and check the plate again and reset the time. it's frustrating beyond description and recently i've taken to banging on it. a couple bangs on each side, and maybe one on the top for good measure. and then it works. the point is i melted the butter completely instead of just softening it, which was probably a mistake.
3. sift the cocoa powder and the confectioner's sugar and stir them into the chocolate butter mixture. and that should be all. but that wasn't all for me because my frosting was liquid. so i sighed and stuck it into the fridge. for a little too long. and it turned to fudge, which looked delicious, but not all that frosting-like. so then i melted it in the stupid microwave and it turned back to liquid. so i froze it for about 10 minutes and then it was nearly perfect, but threatening to become hard again. so i improvised. 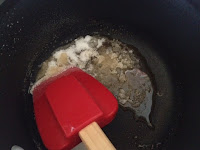 1. combine all three ingredients in a bowl.
2. combine the combined ingredients with the threatening-to-become-hard-again frosting.
3. breathe a sigh of relief because the frosting now looks like frosting.
4. frost the cupcakes.

maybe i would have been better off just following a recipe without insisting on changing it. but the truth is, the frosting was incredibly delicious. and that's not all...

1. melt the sugar on high heat in a non-stick pan, stirring frequently so it doesn't burn.
2. add the heavy cream and turn the heat down to low. the sugar will sort of seize and get all caramely and sticky. just keep stirring it into the cream until it dissolves.
3. add the peanut butter and stir until it's nice and smooth.
4. use a small spoon to drizzle on top of the frosting. 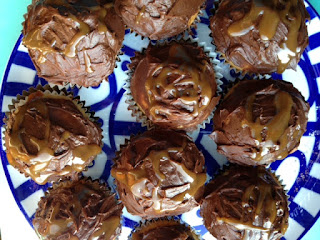 book club was wonderful. i think we spent about five full minutes discussing the book, the marriage plot, and the rest of the time eating and talking about laughing hysterically. i like book club. oh, and the cupcakes weren't anything like butter lane's, nor were they as perfect as my mom's birthday banana cake... but they sure were delicious!